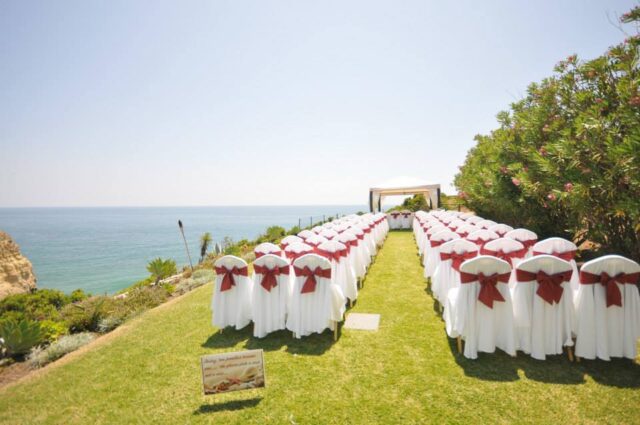 Louise and Craig’s stunning cliff-top ceremony followed by an open-air farmhouse reception should surely inspire us all to have a Portugal destination wedding!?

Find out more about the couple’s big day which included sunshine and shorts, beers and ice-cream, fireworks and Scottish dancing and a trash the dress shoot…..

Louise and Craig first met at a club called the Tap n Tin in Chatham, Kent. Craig is originally from Glasgow and had moved to Kent for work and when Louise asked him if he was Scottish (as she loved his accent), his reply was ‘Yes I am, can I buy you a drink?!’ The rest, as they say, is history!

They had booked a week to go to the Scottish Highlands and on the last day of their holiday, they drove down to Gruinard Bay, a beautiful unspoilt beach in Gairloch. Craig asked Louise if she would like to go for a walk on the beach but the weather was starting to cloud over so initially she said ‘no thanks!’

After some convincing, she decided to go for a stroll with Craig and after a couple of minutes on the beach, he put his arm around Louise’s shoulder and asked her if she would  like to get married! After the initial shock wore off and she realised he was serious, she said yes and they had a celebratory meal in a gorgeous old pub in Gairloch that evening.

Louise has always wanted to get married abroad, in a small and intimate celebration ith glorious sunshine. The couple had been to Carvoeiro (The Algarve, Portugal) for the last six years with Craig’s family so having their wedding there was a natural choice for them.

The couple were blown away by the amazing view from the cliff-top of the Tivoli Carvoeiro and it was an easy decision to have their ceremony there.

Louise is one of five, with three sisters and a brother plus seven nephews and one niece. As they are such a close family, she had always wanted them to be involved in her wedding ‘if’ she got married. Her sisters Anna, Sarah and Catherine were bridesmaids, with Catherine as Maid of Honour, and Louise’s niece Emma was also bridesmaid. Louise’s brother Paul was their witness and their little nephews wore matching pageboy outfits. Craig’s brother Philip was his Best Man.

Louise’s wonderful Mum was there to get ready with her and her bridesmaids in the morning and her dad walked her down the aisle which was very important to Louise, as he had recently been diagnosed with cancer. He was in the middle of chemotherapy when they flew out to Portugal to get married. It was touch and go whether he would be able to make it, but thankfully he was allowed to fly and travelled out with Craig and Louise. Craig’s family had a villa together and Craig got ready on the big day with all of them together.

The couple’s evening reception was at Quinta Da Pomona in Silves, an open-air traditional Portuguese farmhouse in a secluded area with a beautiful built in bar and BBQ. Nestled amongst orange groves, with a spectacular view of Silves and its beautiful cathedral and castle on the hill, the Louise and Craig were delighted with their choice.

‘The owner Rossi, was so friendly and flexible, he immediately showed us all the centre pieces he had to decorate tables and sent us away with bottles of wine to try!’ said Louise.

On the day of their wedding, he surprised the couple with an amazing cake which he had made for them to fit in with a beach theme!

Vision for the Day

They encouraged their guests to wear clothes they would be comfortable as the weather would be hot, so they advised on no suits and that shorts would be fine. They wanted to spend money in the areas that they thought would make the day memorable and these were the venue, entertainment and food. Essentially they wanted something a bit different to the norm and personal to them – and we think this is exactly what they got!

Louise and Craig used Algarve Wedding Planners who they describe as ‘amazing, wonderful, friendly, genuine people with no details overlooked. We couldn’t have planned our day without them, they sorted all the legal side and all we had to do was turn up on the day.’

As with their wedding day, Louise wanted her dress to be very simple and something that would be suitable for the weather. After a few unsuccessful visits to wedding dress shops, Louise began to look online for more affordable dresses which were more unique than the ones she had tried on. After some searching, she found a pre-loved vintage lace strapless dress which she purchased for £100. What a bargain!

Louise’s mum attached a lace trim to the bottom of the dress to lengthen it and make it a scalloped edge and also transformed a lace top from New Look with bridal buttons into a gorgeous wedding top. Louise changed out of her dress after the meal into a short ivory number so that she could  dance all night and be comfortable, which is a great idea for our party-loving brides.

Craig also wanted to be relaxed and comfortable in the heat so opted for shorts. His shorts were from Next, shirt from Debenhams and the plimsoles from Burton.

The couple did a ‘Trash the dress’ session with their photographer and videographer and were both in the sea in their outfits! One quick washing machine clean later and they were all sorted and ready to wear again at their wedding party back home!

As their guests were going to a lot of expense to attend their overseas wedding in Portugal, the couple wanted to give something back to them. They added some really lovely touches to their day that they hoped their guest’s would enjoy.

This included fans for the reception; a very personal order of service with a picture from Louise’s nephew Archie of them getting married and photos from when they were young plus a story of their lives up to now. They had ice cream served on the cliff top just after the ceremony along with beer and champagne.

On arrival at Quinta da Pomona, they had canapés and cocktails and they made individual favour bags with a variety of gifts personal to each guest. They also included a personalised notes thanking their guests for joining them on our big day.

They made individual gift bags with activities and toys to keep the younger guests entertained and had fireworks in the evening. Louise’s sister Anna made both Louise’s and the bridesmaids’ flowers which not only saved them money but also meant that they were very special to them.

They chose to have readings which were a little different from the norm and their friend Graham read a funny poem written about their time together. Louise’s niece Emma wrote and read a beautiful poem  which Louise heard for the first time at the ceremony.

Renowned Algarve duo, Twin Flames, played their favourite songs throughout the ceremony in place of hymns and the couple’s Scottish friend David did the calling for some Scottish dancing in the evening!

Louise recommends using Algarve Wedding Planners – ‘For such a reasonable fee they arrange the whole day and get you the best prices for all of the services. They have an amazing team of suppliers who are top class.’

Her second tip is to think about whether you need all the extra bits of decoration etc. for your wedding. They kept their focus on good venues, food and entertainment and feel it guaranteed a memorable day.

Louise advises brides-to-be not to be pressured into creating another ‘conveyor belt wedding and if you want something a bit different then go for it. Ultimately it is your day and it should suit your personalities.’

Above all, Louise recommends to make sure you have time to enjoy it – ‘ having Algarve Wedding Planners meant we didn’t need to worry about anything. I danced away for the whole night and a group of us even headed into a bar to continue the dancing till 4.30am!’

The couple found their suppliers through Algarve Wedding Planners. They were delighted with their band (Twin Flames) who kept the party going till 1am and loved their talented photographer and their videographer (details below) who stayed till the end, as did their wedding planners.

A huge thank you to Louise and Craig for sharing their wonderful wedding story and photos with us. Look out for Louise and Craig’s wedding video, coming soon to Wanderlust Weddings!