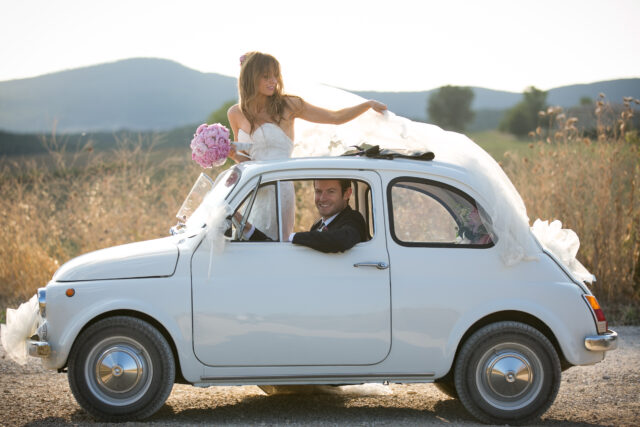 This is without doubt, one of the most magnificent destination weddings we have featured to date. We are delighted to be able to share Sally and Gavan’s delightful destination wedding at Teatro della Concordia,  followed by a rustic reception at Salviano Titignano in the heart of Umbria, Italy.

For anyone thinking of getting married in this beautiful region, make sure you have a look at Sally’s suggestions below and her recommendations on the suppliers they used….

Sally and Gavan first me on St Stephens’ Day (Boxing Day to some people) at the races in 2008 but didn’t exchange details.  They bumped into each other again a few months later at McSorleys in Ranelagh, Dublin through a mutual friend.

When Sally saw it was the same Gavan she had met before, it’s safe to say her heart skipped a beat!  According to Sally, she has never felt so nervous and excited at the same time and still has a smile on her face when she thinks back to that day.

Sally and Gavan were on holidays in Bologna and went for a walk to the beautiful Porticos of Bologna. It was really deserted and they were talking about their plans for the future when Gavan picked Sally up, sat her on a wall and asked her to marry him.   He said he had a more elaborate proposal planned for a few months time but that it just felt right at the time – Sally was delighted he decided to propose then and there, and pointed out that there’s no need for bells and whistles for a question like that!

Vision for the day

The Irish couple were aiming for a relaxed, laid back, chilled out and beautiful knees up where people would really enjoy themselves and look back fondly on the celebration for a long time to come.

Sally and Gavan added lots of DIY details including decorations, making it both personal, cheaper and a hell of a lot of hard work!

Sally looked stunning in a Justin Alexander design which she first saw advertised in a magazine.  She tried on lots of dresses but wasn’t really happy with any of them until she tried this one on.

Although the dress she wore was her absolute favourite, Sally didn’t have a ‘light-bulb’ moment when she knew the dress was definitely the one for her. We think this is a common occurrence for brides, who might not necessarily always know for sure that they have found ‘THE’ dress of their dreams.Either way, we think she looks amazing!!

Sally borrowed a beautiful veil from her very kind and generous friend Vicki, who had her own wedding the year before.

Gavan tried on a suit in Zara for the groomsmen and really liked it, so decided to get it for himself too.  Buying the suits for the groomsmen wasn’t much more expensive than hiring them would have been and it was really nice for the couple to be able to give each of them a suit they could wear again.

The ceremony took place in a stunning Napoleonic theatre, Teatro della Concordia in the Umbrian village of Monte Castello di Vibio. Known as the ‘smallest theatre in the world’ and dating back to 1808, the restored venue offered a stunning and unique backdrop for the couple’s ceremony.

Sally’s family have been going to the village of Titignano for years for their big Sunday feasts.  They have been bringing Gav with them since they met and he’s loved it from the start.  Their wedding reception with 155 guests had a very laid back and informal atmosphere with delicious home-cooked food. The couple knew Titignano would be perfect for a weekend away at a wedding in rural Italy.

We asked Sally what her best decision was. And we love her answers:

Sally gave us a really honest answer to this question which we think is probably similar to how a lot of brides feel about their big day, but might not always feel able to say it:

Although I tried to be as relaxed as possible I still felt pretty uptight.  There’s such a big build up to one day and an expectation that everything is perfect.  People who know me may be surprised to hear this but I don’t really like being the centre of attention, and feel a lot of pressure when I am! So maybe being more relaxed was unrealistic.’

Sally also explained that they did a haphazard rehearsal for the ceremony and there was a little confusion on the day. She advises to either be prepared for the fact that the ceremony might not go 100% to plan or do a thorough rehearsal in advance.

‘I would really recommend doing something the day after the wedding.  We had a dinner the day before our wedding, which both my husband and I felt a bit stressed out at. The day of the wedding was fab, but we both really really loved the day after. It was so relaxed and we got to catch up with friends who we hadn’t seen in ages and had travelled so far to see us’

Sally also recommends Pinterest as great way of getting all of your ideas together and making sure you don’t forget them!

Sally found most of her suppliers through extensive internet research. Below are her recommended vendors:

Sally and Gavan can’t recommend Peter highly enough. ‘It was really fun designing the engagement rings and getting to pick the diamonds we wanted to put in it.  Peter was a total gent, didn’t make us commit until we were happy with the finished product and beat the pants off everyone else’s prices!’

‘A brilliant photographer and a really really nice guy (At least one guest had fallen head over heels for him by the end of the night!).’ Again the couple couldn’t recommend him highly enough!’

More inspirational photos from Sally and Gavan’s big day can be found on Cristiano’s webesite on the following link:

‘The Milan of the Northside’ as it became fondly known by the couple’s family.

Sally designed her own bag in conjunction with Cathy which she really enjoyed. ‘The handles and materials Cathy has are really stunning and she’s so sweet and talented.’

‘Nicole was amazing, she turned a ho-hum dress into a glove and completely saved the bridesmaids’ dresses!’

Hair and nails: Look Idea (via sabola, 6 San Terenziano, Umbria) Italy. ‘These guys were fantastic! We got them last minute as our original girl fell through (a blessing in disguise).  They were really talented, so friendly and accommodating and were really reasonably priced.  They came to us the day of the wedding and the day after.  Catia has lots of assistants so loads of the guests got their hair done too.’

The couple decided to cut out the middle man and went directly to a small company in India which hand-makes their own paper.  The quality of the paper was fantastic although getting the designs sent to them in the required format was a little challenging. Sally and Gavan were really pleased with the end result. Check out some of their stunning hand-made, hand-printed paper for yourselves…..

Thank you so much to Sally and Gavan for sharing their wonderful day with us. They did an amazing job of organising their day (without a wedding planner) and Sally’s advice on the various suppliers above will be invaluable to other couples getting married in Umbria.

A touch of 1950’s charm at this incredible Irish wedding