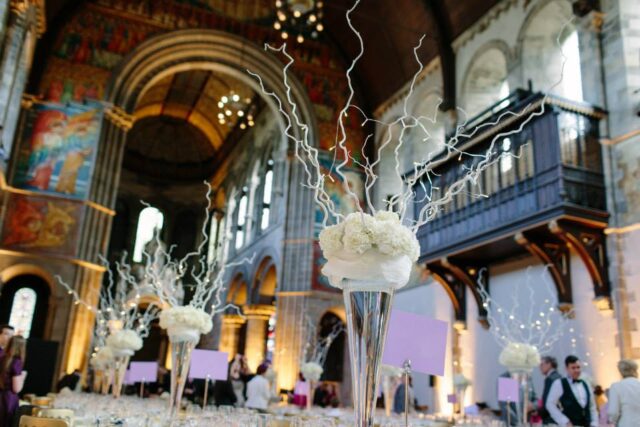 From bagpipes and thistles to a traditional catholic ceremony, Tara and William’s Edinburgh wedding was a perfect combination of their Irish and Scottish roots.

The ceremony took place in St Mary’s Cathedral with the reception in magical Mansfield Traquair. The couple finished off the festivities in true Irish style with a Scottish ceilidh at the Sheraton Grand Hotel Edinburgh the following evening.

These two lovebirds met outside an Edinburgh nightclub in 2006 and after meeting up a week later minus the beer goggles, the rest is history!

William’s proposal was one of the sweetest we have come across. He took Tara away for the weekend to Scotland’s Loch Rannoch and stopped off on the way back at one of his favourite childhood walks, the Birks of Aberfeldy. At the top of the hill by the waterfall, Tara turned around to talk to William and there he was – down on one knee with a ring in his hand!

The couple had their ceremony in charming St Mary’s Roman Catholic Cathedral and the service was carried out by Tara’s dad’s cousin, a priest from Waterford, Ireland. It was important for Tara and William to have all of their family and friends at their wedding and the ceremony was full of personal touches including some lovely poems read by the groom’s sisters. There were also bible readings from friends and family and Tara’s auntie sang during the ceremony.

Tara wore a stunning Essence of Australia gown, from Kudos Couture – a nod to her Australian family.

Her bridesmaids were radiant in royal blue dresses from Berketex while William’s traditional Scottish kilt was from John Morrison Kiltmakers.

The reception took place at the stunning Mansfield Traquair, a wildly romantic venue in the heart of the city, and aptly referred to as ‘Edinburgh’s Sistine Chapel’.

With its intricate artwork and high ceilings, this fairytale venue was the perfect place for Tara and William to celebrate in style.

‘There are lots of wonderful wedding venues in Edinburgh. I recommend googling “Edinburgh wedding venues” and taking it from there. In Edinburgh you have castles and museums to stables and stately homes to choose from, so it depends on what you like. There is definitely something to suit everyone…’

Tara chose her suppliers mainly through word of mouth and some recommendations from the reception venue. She also used the services of her talented friends and family!

An unbelievable Umbrian wedding full of creativity and charm